Simon Vincent – Stations of the Cross 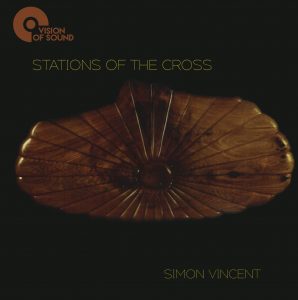 “Simon Vincent’s ‘Stations of the Cross’ comprises 17 short, slow movements, inspired by a visit to Jerusalem and by William Fairbanks’ wood sculptures in Lincoln Cathedral. Vincent’s vision resonates with Messiaen’s contemplations of the Divine while using his own musical vocabulary. All movements are projected by the composer with the utmost concentration: when Jesus falls for the second time (Station VII), it is as if we observe the event objectively, frozen in time. The use of silence recalls the music of Morton Feldman: spaces between notes bristle with energy and potential, as relationships between the individual and the collective are explored. The ‘Meditations’ act as a vital part of the experience, an exploration of the power of chordal structures. An immersive experience, deeper than its duration might imply.”
5 Stars
International Piano

“A human figure weighed down by a burden is invoked by the lengthy, sustained chords of Simon Vincent’s Stations of the Cross. Listeners unable to connect with the image of Christ experiencing crucifixion are invited to use this solemn music as a prompt to reflection upon the capacity of contemporary society and state to accept, without compassionate intervention, the widespread and persistent suffering of individuals. Vincent’s work appears unrelievedly sombre and fixated if you compare these 17 movements, prefaced by a meditation on Gethsemane that unequivocally sets the sober tone, with the emotional and expressive variety of Vingt Regards Sur L’Enfant-Jésus (1944), Messaien’s celebrated devotional cycle for piano. But given the piece’s declared purpose that cumulative gravity is also its strength, Vincent allows in just enough light to keep it from growing too ponderous.”
Louis Pattison, The Wire Magazine

As a symbolic reenactment of the Via Dolorosa – Christ´s tortuous route to the cross and his “passion, death, resurrection and glorification,” according to Catholic catechism – stations of the cross likely began to appear throughout Christendom in the fifteenth century. As ritual performance art for the faithful without priestly interdiction, the stations demand active physical and mental engagement from participants – prayer, reflection, walking to the next station.

In composing Stations of the Cross, British composer and pianist Simon Vincent was inspired equally by his own visit to Jerusalem in 2015 and the installation Forest Stations by William Fairbank, displayed in Lincoln Cathedral and featured on the cover of this release. Prologued by an earlier piece, “Meditations on Christ in the Garden of Gethsemane”, which perfectly dovetails with the sixteen newly-written, brief movements of Vincent´s quietly powerful suite, the silence within is as deliberate and essential as the chords, which while agile as jazz are few and far apart, at times separated by absolute prairies of silence. Sometimes Vincent´s fingertips seem to only hover above the keys, brushing over rose petals or pricked by thorns. Sometimes the silence will be broken dramatically, even dissonantly. Regardless, each time there is ample opportunity for contemplation as they tone away.

Inspired by one work of visual art, perhaps Vincent´s Stations of the Cross comport even more resonantly with another, Barnett Newman´s stark, human-size paintings of the same name. For Newman, a non-observant Jew, the stations are not so much a palpable representation of the Paschal account but rather attest to the human condition in general – “Lema sabachtani – why did you forsake me?” – the question without answer, each and every man and woman´s agony, “the agony that is single, constant, unrelenting, [and] willed,” as he wrote in the accompanying catalogue. This fate connects us all, something which Vincent refers to in his liner notes: “It is intended that the work opens up reflection upon and discussion of the image of a sole human figure weighed down with burden, an image which for me raises issues of the relationship of the individual to a society and a state which are not only capable of looking away but also of allowing suffering, themes of truly vital relevance to us today.”

Simon Vincent’s 2016 piece Stations of the Cross consists of 17 short movements for solo piano, here played by the composer on his own Vision of Sound label. Stations of the Cross is prefixed by an earlier work dating from 2013, Meditations on Christ in the Garden of Gethsemane. Vincent is a composer of acoustic and electronic music, and was nominated for the 2014 Paul Hamlyn Award for Artists.

Stations of the Cross was inspired by William Fairbank’s installation in Lincoln Cathedral, Forest Stations, a series of wooden sculptures. Fairbank says on his website that ‘their naming refers to the sculptor’s love of timber and his concerns for the preservation of forests and trees throughout the world. The sculptures tell the story of the traditional account of Jesus Christ’s death, depicting each stage, or station, along the road to the place of crucifixion. The images are formed within the natural and carved shapes and colours of different timbers.‘

Vincent’s piece was also galvanised by a short visit to Jerusalem in 2015, and the work takes the form of fifteen stations each named for one of Fairbank’s stations, with an opening ‘First Offering: Opening’ and a final ‘Second Offering: Conclusion’. Vincent premiered the work in Lincoln Cathedral on 18 April 2017, the start of a series of recitals in cathedrals and churches in the UK.

Vincent’s music is spare and minimal yet without any references to Minimalism. He uses long sustained chords intended as moments for reflection and prayer. The music is austere with widely spaced chords with a striking use of dissonance and differences in register. Vincent’s performance does make a strikingly intense impression, with the moments of stasis and silence taking real importance.

The music is thoughtful, with the chromatics of the harmonies making a striking impression. There isn’t a sense of harmonic progression, instead the placement of notes and chords as objects to be contemplated and thought about.
Robert Hugill, Planet Hugill

‘Stations of the Cross’, a new work for solo piano by British composer and pianist Simon Vincent, was inspired by a visit to Jerusalem in 2015 and by William Fairbanks’ installation in Lincoln Cathedral. Entitled Forest Stations, the installation is a series of sculptures in wood and reflects Fairbanks’ love of timber and his concern about the preservation of forests and trees. The sculptures tell the story of Christ’s death, the ‘Stations of the Cross’ being the places on the route to the place of Crucifixion where Christ is said to have stopped. For the faithful, each station, or stopping point, provides a point of prayer and meditation on the Passion of Christ.

Simon Vincent’s ‘Stations of the Cross’ (2016) is a series of 17 short movements, depicting Christ’s spiritual, emotional and corporeal journey to his death on the cross.

The work is prefaced by an earlier piece, ‘Meditations on Christ in the Garden of Gethsamane’ (2013) whose sombre, reflective mood prepares the listener for the main work on the disc. Musically, ‘Stations of the Cross’ owes much to Morton Feldman, master of stillness and controlled, deliberate silences, while the concept of a cycle of devotional meditations connects this work to Messiaen’s epic ‘Vingt Regards sur l’enfant Jesus’.

Vincent’s carefully-placed chords are infused with jazz harmonies, while subtleties of tonal colour are achieved through long, sustained notes and the piano’s resonance. It’s the kind of music that demands to be heard live, preferably in an acoustic which allows the timbres and unexpected fleeting clusters of notes and rhythmic fragments to linger in the air like memories.

It was Claude Debussy who declared that “music is the space between the notes”, and the pauses and fermatas which colour ‘Stations of the Cross’ allow one to fully appreciate every single note and chord. Into this void, the sounds reverberate and resonate with a meditative stillness and restrained expressive gravity. The effect is powerfully cumulative, despite the brevity of each movement, with a sense of the music building inevitably towards its contemplative conclusion.
Frances Wilson, The Cross-Eyed Pianist

If you’re after a pianistic experience of a radically different nature from the one described above, consider this sparse, deeply contemplative, almost pointillistic tone poem from pianist and composer Simon Vincent. After a standalone piece depicting Jesus Christ in the Garden of Gethsemane, the main work follows him along the road to his crucifixion.

Inspired by the sculpture installation Forest Stations by William Fairbanks (which depicts the Stations of the Cross by means of wooden carvings), Vincent’s piece consists of brief interjections of sound that emerge from long stretches of silence, in a manner that brings to mind Morton Feldman’s chamber works.

The harmonies are generally fairly consonant, but to call this work “tonal” would be misleading — it doesn’t progress according to typical rules of harmonic movement. It really has to be heard to be comprehended, and it’s quite moving.
CD Hotlist, CD Releases for Libraries

Last year I reviewed Vincent’s collaboration with trumpeter Tom Arthurs (‘Real-time Sound Sculptures Vol.1), a work that was hard to digest for me. Earlier there was the debut-CD ‘Opening Lines’ of his Occasional Trio.

With his latest release for solo piano, Vincent shows a totally other face of his art, although there is continuity with his refined piano playing in the trio. With ‘Stations of the Cross’ we are dealing with an example of music that explicitly comes from a religious inspiration.

“Inspired by William Fairbank’s installation in Lincoln Cathedral entitled Forest Stations, and galvanised by a short but moving visit to Jerusalem in 2015, I have composed a new work for solo piano depicting Christ’s spiritual, emotional and corporeal journey, accompanying His path to Crucifixion and subsequent Resurrection”, Vincent explains in the liner notes. The work consists of 17 short parts. First and last one are meant as an introduction and conclusion. The 15 pieces in between offer interpretations of the respective stations of  ‘The Forest Stations’. Another quote to illustrate his intentions: “It is intended that the work opens up reflection upon and discussion of the image of a sole human figure weighed down with burden, an image which for me raises issues of the relationship of the individual to a society and a state which are not only capable of looking away but also of allowing suffering, themes of truly vital relevance to us today”.

All 17 parts are very limited in time and characterized by long sustained chords that disappear in silence. They fall like drops in an ocean of silence. This music is built from very sparse elements. It sounds static, sometimes a bit dissonant and provokes a reflective mood. The opening track ‘Meditations on Christ in the Garden of Gethsemane’ is also a sequence of chords and short patterns embedded in silence (or is it the other way round?) The chords played here by Vincent have a jazzy touch.

A lecture by a musicologist I visited many years ago came to my mind that, in reference to the work of Arvo Part and John Tavener and the likes, spoke of  ‘under-composed music’. The music of Vincent is of a similar minimalism and likewise associated with religious meanings yet in the end it is closer to the work of Morton Feldman. The performance by Vincent is very inspired. For music that is built from a few notes and chords, it is essential to really believe in them as a performer/composer.
Dolf Mulder, Vital Weekly

In the January Papatamus I wrote about SIMON VINCENT [p] returning to acoustic piano after almost 2 decades using electronics. Vincent has now issued STATIONS OF THE CROSS [Vision Of Sound voscd-003] and calls this a contemporary classical work for solo piano and as he is the composer and player, I’ll take his word for it. This is a short CD [32:01] and with it largo and deliberate pacing it’s as much about silence as it is the notes and decay. To me while I am informed that it is written it is at the nexus of improvised and written music or instant composition and pre-composition and in fact Vincent says that the composition came out of intense improvisation. It is almost Satie like without the melodic harmonies. Lessons in silence and space.
Robert D. Rusch, Cadence Magazine/Papatamus