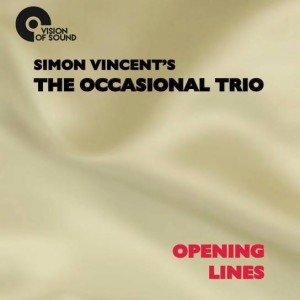 After almost 2 decades SIMON VINCENT has returned to the acoustic piano with the release of OPENING LINES [Vision Of Sound Records voscd-001] and an EP THE OCCASIONAL TRIO [Vision Of  Sound Records vosprcd 001] Vincent has written some lovely tunes and plays them with a Debussy-like tension and style which may suggest Bill Evans but without the harmonic overlay. Fidezius and Fischerlehner each do a fine job and have some fitting solos. More please, this is a fine mainstream pianist.
© Robert D. Rusch, Papatamus, Cadence Magazine

Simon Vincent is a Berlin based pianist and composer who stretches his musical expression across electronic and acoustic environs to solo, duo and trio settings. Until recently if you were in Berlin, you were most likely to see him creating sounds behind an Apple laptop in the experimental electro-acoustic space, but after a lengthy hiatus (since 1998) he has returned to the piano with his most rigorous jazz platform, the ‘Occasional Trio’. An almost fascinating rediscovery of the sounds that once defined him, Vincent’s acoustic jazz trio is made up of fellow Berliners Roland Fidezius bass and Rudi Fischerlehner drums. With a refreshingly reinvigorated approach, Vincent teases sounds out of the Bosendorfer with dexterity of touch that is as dynamic as it is sublime. All nine compositions from the album are Vincent originals. ‘Well you Shouldn’t’ has an abundance of intensity and forward momentum coupled with his Monk influence and highlights the melodic drumming of Fischerlehner who incidentally has collaborated with Tony Buck of The Necks. ‘Rain Drops in June’ is one of four compositions played in waltz time on the album and as I write this on a wet Sydney June day, the rain drops outside are as dense and intensive as the walking Fidezius bass line. The haunting melancholy melody of this piece is then acutely diced by the pianist into tasty portions of block chords and bluesy vignettes. Elsewhere on the album, the trio extend themselves into unknown trajectories with free-form improvisations born out of weightless space that develops into freight train-like gravitas. Occasionally, too much of a good thing can be wonderful.
© Peter Wockner, Jazz and Beyond, 2016

No electronics here, but acoustical jazz by a trio that deals in subtle and inspired manoeuvres. Their jazz is of a lyrical nature. It has delicate playing by Vincent on the piano, with two perfect companions on drums and bass. Open and transparent interplay is to be enjoyed from start to finish. With this project Vincent, after a long pause, makes a return to piano and also to the classical jazz trio format. For those who are into this references to Monk and other giants surely will be evident. All pieces are crystal clear constructions, whether composed or improvised. Built from effective and well-proportioned musical ideas. It may sound ‘traditional’ at first hearing, but for sure this is a very original effort. The CD counts nine compositions. Vincent composes seven of them; one by Fidezius and one is a group work. All recorded during a session in September 2015 in Berlin’s Low Swing Studios.
© Vital Weekly, 2016

Simon Vincent is best known for his electroacoustic works and in that context, his path had recently crossed that of singer Sophie Tassignon in the futuristic chamber music project ‘Charlotte & Mr. Stone’. Moreover, Opening Lines constitutes somewhat of a surprise since it allows us to listen to him in the more traditional framework of an acoustic piano trio. Accompanied by bassist Roland Fidezius and drummer Rudi Fischerlehner (both members of saxophonist Peter van Huffel’s exciting hardcore Gorilla Mask project), Simon Vincent presents at the piano nine new compositions, seven of which are his, and which stretch themselves weightlessly out towards the four cardinal points of his emotional world. From the very first track, ‘Tender Love’, we discover a pianist with a delicate touch enticing his companions into a lyrical, extremely evocative music. Other ballads like ‘Future Memory’ or ‘Last Call’ again emphasize the meditative side of a trio that, like those of Paul Bley, favours interiority and allusion. On ‘Prayer Unto The People’ and ‘I Can See You Now’, the two free improvisations in the repertoire, opulent yet always highly-nuanced exchanges prevail as in an intimate conversation, or as sentences arising spontaneously in response to one another without intention or established order. With a title that refers to a famous composition by Thelonious Monk, a reference that is perhaps not as innocent as you might think, ‘Well You Shouldn’t’ is classic post-bop and is an opportunity to hear the pianist pushed and driven by something akin to a power turbine, fed by the propulsive beats of a particularly vigorous Rudi Fischerlehner. Finally, Portsmouth Blue, dedicated to Dave Brubeck, is navigated with enthusiasm and certainly contains, in its exquisite opulence, some discreet or even encrypted references to the most classic of great jazz pianists. To sum up, Opening Lines proves to be not only a pleasant CD but also remarkably constructed and capable of arousing a range of emotions. Finally, it would be remiss of me not to mention the informative liner notes written by Vincent himself about his artistic motivations and intentions, as well as the studio’s Bösendorfer grand piano whose majestic sound is so well recorded and mixed here.
© Pierre Dulieu, Dragon Jazz, 2016

———————————————————–
Composer and performer of experimental electronic music Simon Vincent (known also from the activities of the duo ‘Charlotte & Mr.Stone’) has brought to life a new band: Simon Vincent’s The Occasional Trio. Besides the leader at the piano, the trio consists of musicians originating from the group Gorilla Mask: Bassist Roland Fidezius and drummer Rudi Fischerlehner.

This album, at the same time being the first full release in the catalogue of relaunched label Vision Of Sound, was preceded by an EP ‘Vision Of Sound Records Presents: Simon Vincent’s The Occasional Trio’ which, already a few months prior to the release of the album, aroused the appetite of lovers of intimate jazz, preparing them for a full album by The Occasional Trio. The album entitled ‘Opening Lines’ contains nine tracks, which, in the light of Vincent’s previous recordings, all teetering on the verge of sound experiments, presents a music undeniably closer to a traditional jazz formula. For Simon Vincent has returned after many years to the intimate form of the traditional piano trio, releasing the artist’s inherent layers of great sensitivity, which are set free thanks to this sound combination.

The recordings gathered on this album, made during a session in September 2015 in Berlin’s Low Swing Studios, reveal the leader taking creative inspiration from jazz giants such as Duke Ellington, Dave Brubeck and Thelonious Monk, as well as classical music. However, as a pianist, Vincent has a highly characteristic sound which he has been developing for many years, and which he is able to implement in an ideally proportioned way allowing him to balance roles both as an instrumentalist and composer. The cooperation of Simon Vincent’s extremely creative sidemen, Fidezius and Fischerlehner, resulting in the joint composition ‘Well You Shouldn’t’, and the inclusion of Fidezius’ exceptional ballad ‘Last Call’ point to the fact that the The Occasional Trio’s democratic setup also extends as far as the compositional material chosen for ‘Opening Lines’.

An excellent introduction to the characteristic sound of the album is the captivating piano intro of ‘Tender Love’, extremely intimate in its lyricism, a track later on embellished with a great bass solo from Roland Fidezius. The role of his bass is also very apparent in maintaining the waltz rhythm in the relaxed composition ‘Raindrops In June’, highlighted by a beautiful melody and vast, shimmering piano impressionism.

Also noteworthy is the stylistically perfect placing of Rudi Fischerlehner’s drum work. Engaged over the years in various musical projects (for example Pinx and Grid Mesh, and oscillating between improvised music and experimental rock collaborations with the likes of Andreas Willers, Ingrid Laubrock, Olaf Rupp and Matthias Muller), the Austrian musician fits the sound of The Occasional Trio wonderfully. One of Fischerlehner’s greatest performances on this album is a brilliant solo on the aforementioned ‘Well You Shouldn’t’.

‘The Oak Tree’, a brief impressionistic composition, brings a moment of true relaxation in the form a kind of stylistic ‘enteracte’ which divides the album into two parts.

Once silence has been achieved, the intimate piano opening of ‘I Can See You Now’ gives rise to a series of improvised explosions in which each of the instrumentalists release fanciful layers combined with a unique sensitivity for sound materials. The tracks’s tranquil piano moments are accompanied by the bass bowing of Fidezius and Fischerlehner’s percussion avalanches.

A beautiful end to the album, ‘Portsmouth Blue’ is dedicated to the late and much lamented Dave Brubeck.

Let’s hope that The Occasional Trio once again find ‘circumstance’ for a joint meeting in the studio and the realization of another equally interesting project.
© Robert Ratajczak, Longplay, 2016